iPad has always offered a uniquely simple yet immersive experience. And now with its expansive 12.9-inch Retina display, nearly double the CPU performance of iPad Air 2, and refined Multi‑Touch technology, iPad Pro adds another dimension to that experience. It’s not just larger. It’s an iPad that lets you be more creative and more productive — at a whole new scale.
Latest news
Retina Display
A canvas designed
for your biggest ideas.
With 5.6 million pixels, iPad Pro features the highest‑resolution Retina display of any iOS device. The 12.9‑inch screen makes everything you do — editing 4K video, designing presentations, running a business — easier, faster, and more engaging. And the Multi‑Touch subsystem has been reengineered, expanding the ways you can interact with iPad.
Learn more about design > 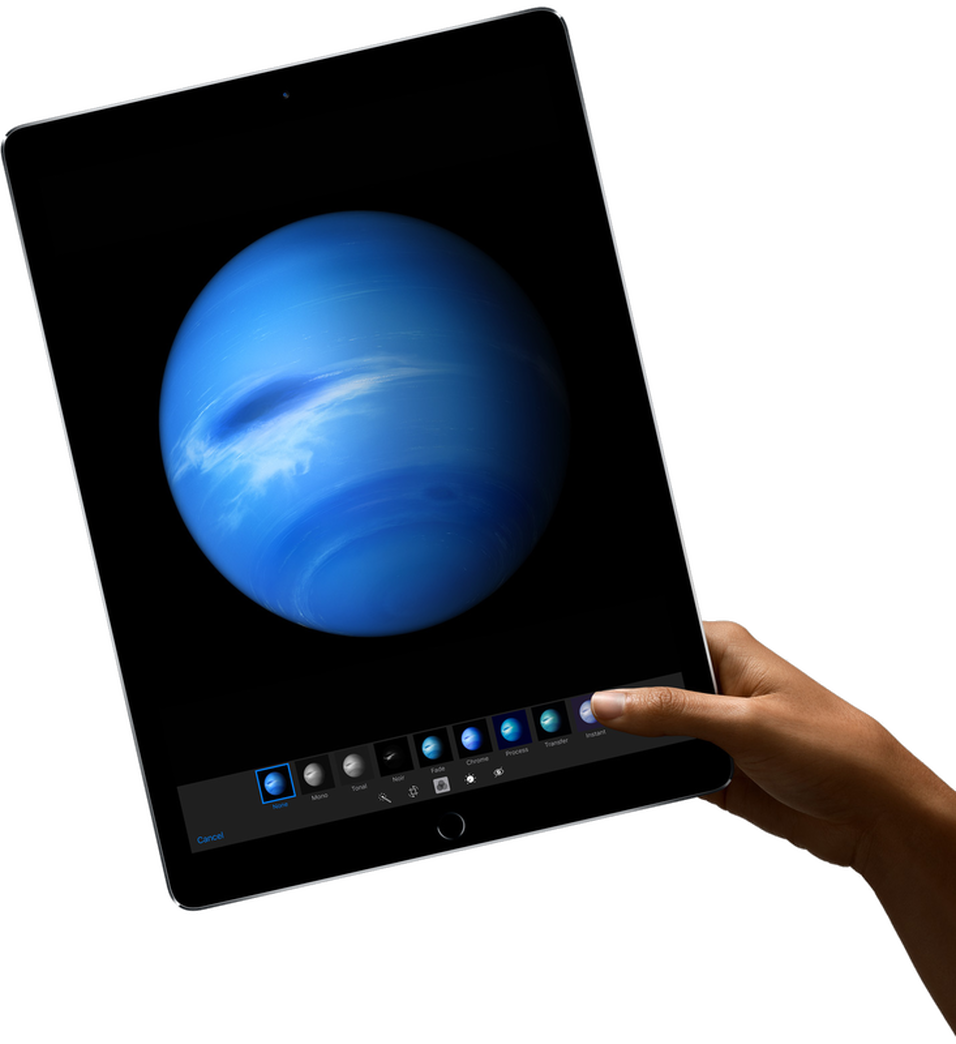 A9X Chip
Our most powerful chip
for our most capable device.﻿
At the heart of iPad Pro lies the new A9X, our third‑generation chip with 64‑bit desktop‑class architecture. It delivers up to 1.8 times the CPU performance and double the graphics performance of iPad Air 2. So even the most demanding apps run effortlessly.
Learn more about Technology > 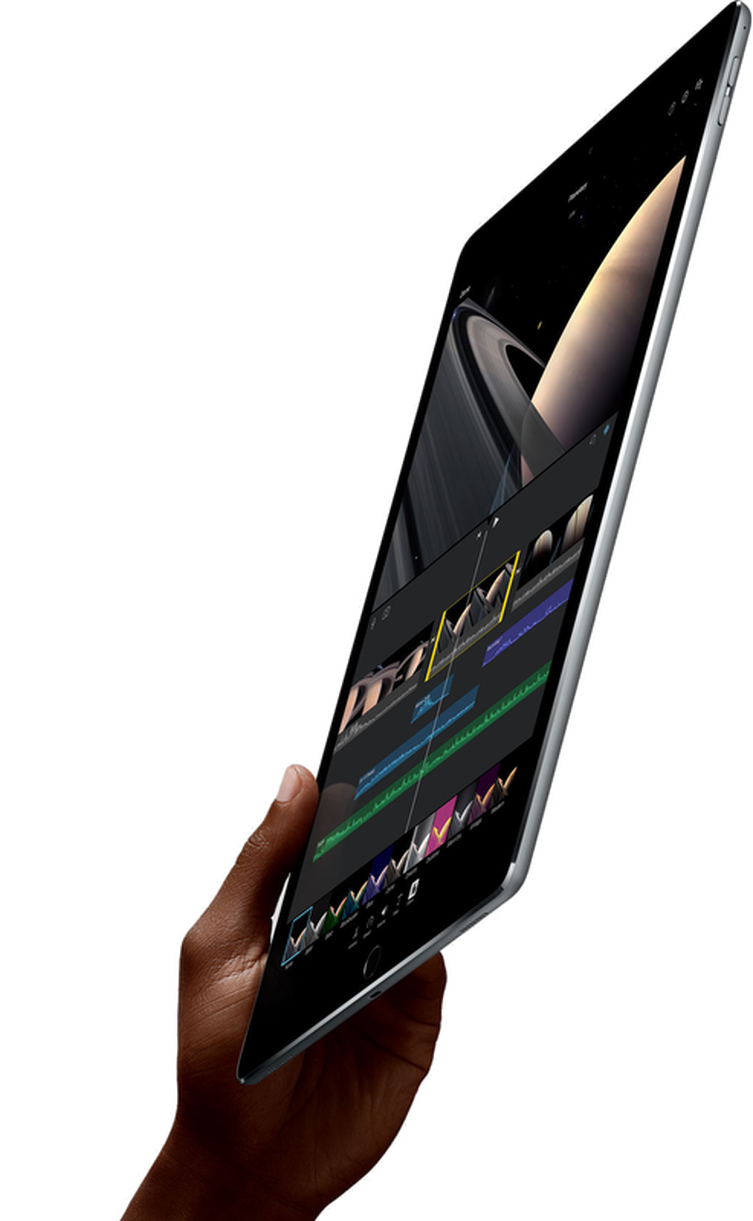 IOS 9
A better experience with every touch.
iOS 9 is the most intuitive, advanced, and secure mobile operating system in the world. With new capabilities that take full advantage of the powerful performance of iPad Pro, it helps you be more productive and creative. Multitasking makes running two apps at once a snap. And improved features throughout the system, including Siri and Spotlight search, make iPad even more useful. If it feels like iOS 9 and iPad Pro were designed for each other, it’s because they were.
Learn more about IOS 9 > 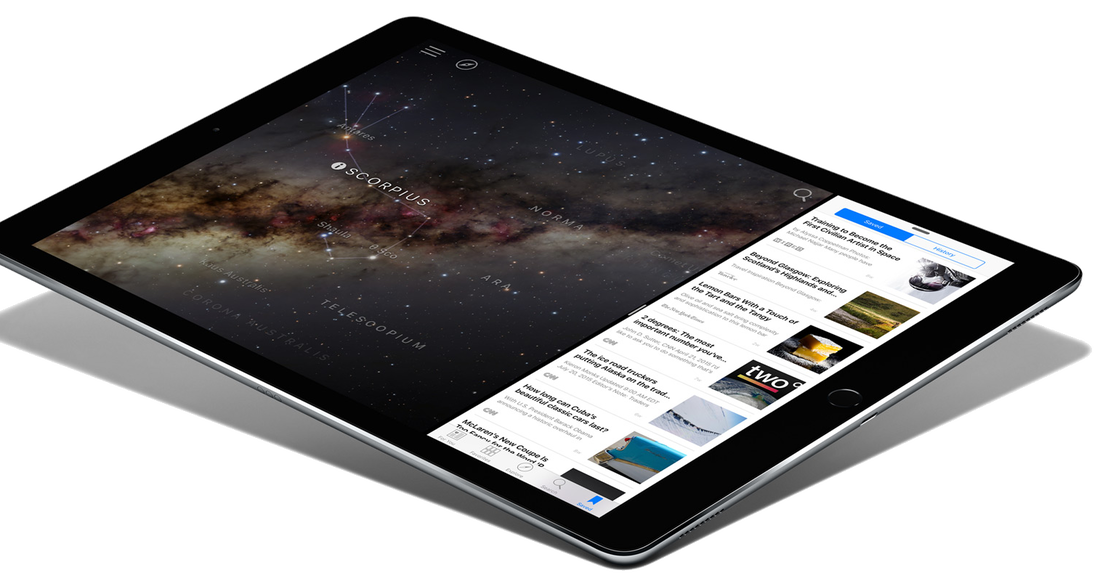 Apps for iPad
More iPad than ever. So apps can
do more than ever.
iPad Pro comes with a variety of built‑in apps that make it easy to take on the essential things you do every day. And on the App Store, you’ll find incredible apps designed just for iPad, so there’s virtually no limit to what you can do.
Learn more about IOS 9 >
Design
Huge in almost every way.
Even with its massive display, iPad Pro has an astonishingly slim and light design — just 6.9 mm thin and 1.57 pounds. Yet thanks to the strong unibody enclosure, it feels well‑balanced and sturdy. For all its capabilities, the most surprising thing about iPad Pro may be how easily it seems to disappear in the hand.
Learn more about Design >

Four Speaker Audio
A rich listening experience at every turn.
With four new high‑fidelity speakers built directly into its unibody, iPad Pro creates an audio experience as big as its display. The new design produces an engaging soundstage with three times the acoustic output of iPad Air. But it goes even further than that. iPad Pro automatically adjusts the orientation of the high frequencies according to how you’re holding it. So whether you’re playing a game or watching a movie, the sound of iPad Pro is more immersive than ever.
Learn more about Design > 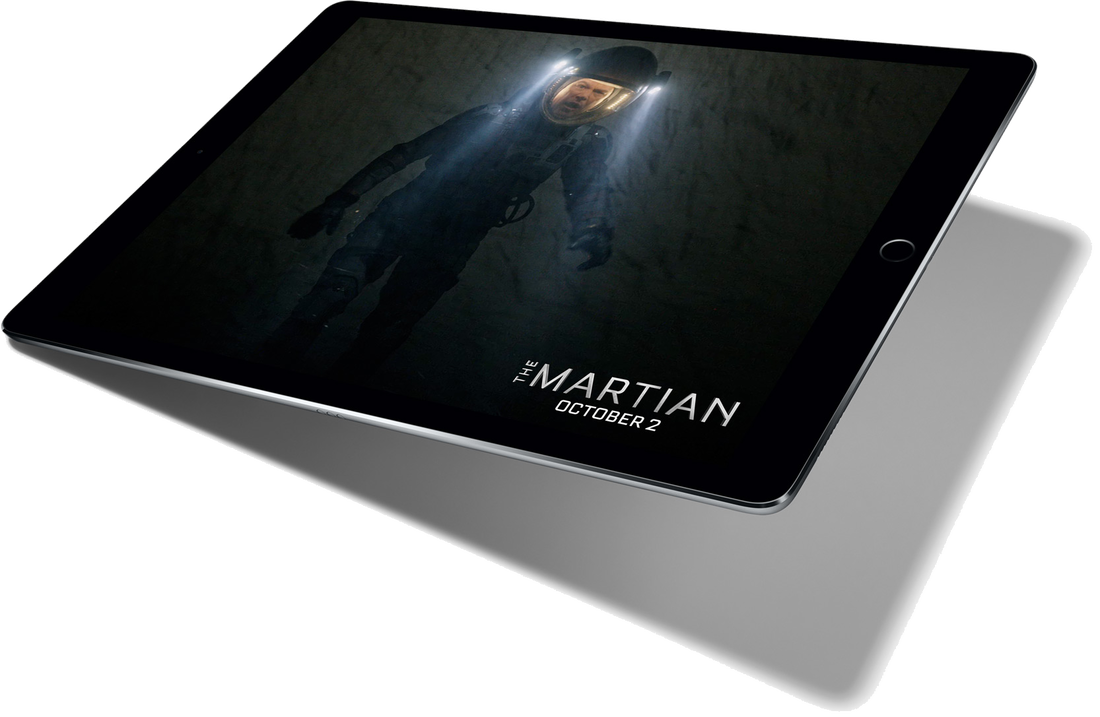 The New Smart Keyboard for iPad Pro
The only Thing we didn't reinvent was the alphabet.
The Smart Keyboard combines an array of new technologies and materials to create a keyboard like no other. It’s a full‑size keyboard that’s fully portable, and connects to iPad Pro with the Smart Connector, an innovative new interface that allows for a two‑way exchange of power and data. Just attach the Smart Keyboard and start typing.
﻿Learn more about Smart Keyboard >﻿ 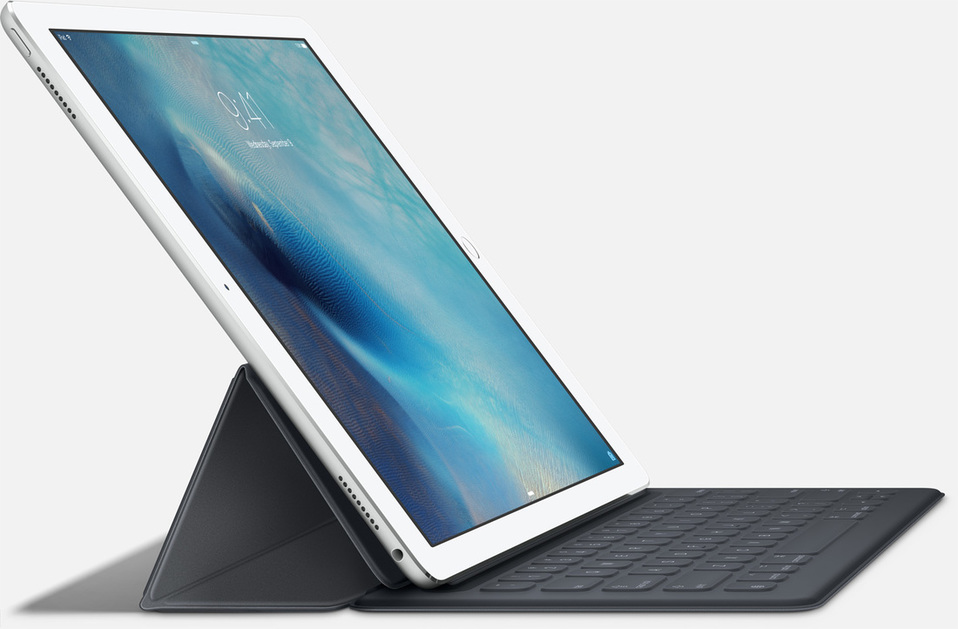 Introducing Apple Pencil for iPad Pro.
Completely familiar.
Entirely revolutionary.
With its pixel‑perfect precision, Apple Pencil expands the power of Multi‑Touch and opens up new creative possibilities. It’s sensitive to both tilt and pressure, allowing you to create a range of artistic strokes and effects — from the thinnest of lines to subtle shading. Beyond adding new capabilities to iPad Pro, Apple Pencil also feels completely natural and responsive from the moment you pick it up.
Learn more about Apple Pencil >